It has been a sheer delight the past few days, as people have begun receiving and assembling their MEGA65 DevKits, and even started to create things using them!

In case you missed the action, there are now several first impressions / assembly videos up on youtube:

That first one is from Shallan, who does regular twitch feeds, including writing C64 games -- and now that he has a MEGA65 DevKit, on coding for the MEGA65. He has already made his own 256-colour image loader, and started working on using the MEGA65's Raster Rewrite Buffer (RRB) to do a thousand hardware drawn 256-colour moving bullets over the top of a 256-colour background, and using only about 10% of the CPU to do it. You can see what a busy 320x200 screen with 1,000+ blobs looks like here: 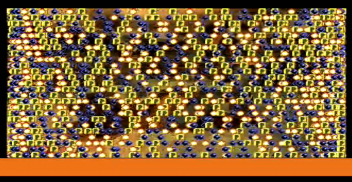 You can hardly even see the background. This is just one of many uses of the Raster Rewrite buffer -- so expect to hear a lot more of "RRB" being thrown around.

So hop onto Shallan's live twitch feeds or playlist of videos he posts after for the low-down on how to make the MEGA65 do amazing things.

There is also plenty of action elsewhere. For example, there is a CSDB C64 sprite graphics competition, offering a MEGA65 DevKit as a prize, thanks to the generosity of the community!

Anyway, we are just so happy that people are having a great time with the MEGA65, and re-experiencing that joy of Christmas 1982 of receiving their first C64 (or VIC-20 or other home computer), and then diving in to explore the machine, knowing that they were entering exciting and uncharted territory.

One great point of satisfaction for everyone involved, is how amazingly nice the keyboards have turned out. We put a huge amount of effort into making the best possible keyboard for the MEGA65 -- from Cherry MX mechanical keys to the double-shot top and front-marked key caps and space bar long enough to land a fully laden A380. And so it has been sheer delight to see people fall in love with the keyboard, and experience sitting down at a device that _is_ a brand new 8-bit era computer for the first time in decades.

I am sure that there will be lots more interesting videos and material coming out, as people get their DevKits setup, and start tinkering. We hope you enjoy the journey as much as we are!