Today we have an update from Hernán on his Sprite Editor work. Over to Hernán!

In the software side of the project we have been working adding more features in the built-in Sprite Editor, which you can invoke from the Freezer menu.

Keep in mind that the current version reads and writes registers and sprite data from the freezer memory, not the “frozen” program itself. This is a planned feature and means that you will be able to freeze your favourite game, hack it’s sprites, and go back to play it seamlessly

Let’s begin with the improvements.

The first enhancement in terms of UI is the addition of a help screen with the available commands for a quick reference along with polishing the informational sidebar.

Regarding the drawing facilities, this version adds a toolbox with the possibility to draw pixel, lines and rectangles, in any sprite color mode supported: hires, multicolor or 15-color. 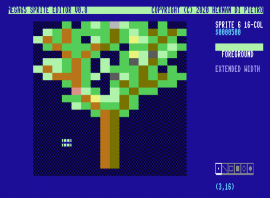 A 16 color sprite of a tree

The VIC-IV offers 64-bit width sprites through the SPRX64EN ($D057) register, yielding a real horizontal resolution of 64, 32, and 16 pixel-across sprites for hires, multicolor and 15-color sprites respectively. This is now supported and you can toggle it for any sprite pressing @-key. 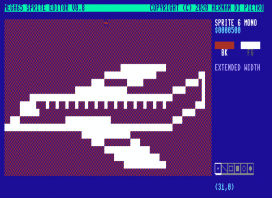 Besides this, the Sprite Editor will now honour the current color, VIC-II bank and SPRPTR16 registers; but as we said in current system memory, not yet in the frozen program.

Finally, a nice feature introduced in this release is the “Test Mode” which allows the user to preview the sprite against a solid background, optionally toggling X and Y expansion registers, and playing an animation by cycling through each sprite. 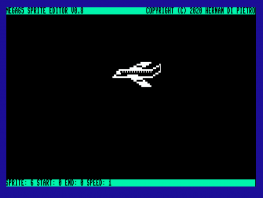 We hope the Sprite Editor to be used extensively at hacking existing games and demos; and of course being a handy tool to develop software for the MEGA65 machine.

You can play the video below to checkout the Sprite Editor running.